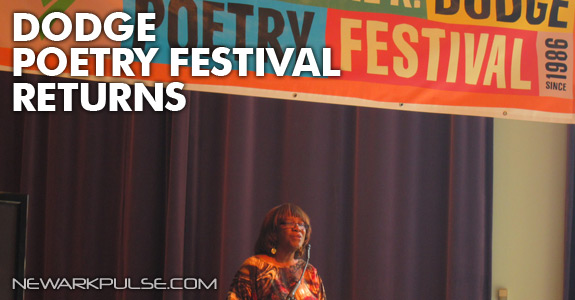 Yesterday, along with Mayor Booker, sponsors, and the nationally acclaimed poet, Patricia Smith, NJPAC and the Geraldine R. Dodge Foundation gathered to announce the 14th biennial occurrence of the Geraldine R. Dodge Poetry Festival. Hosted for the 2nd time in Newark, the festival is lauded as the preeminent festival of poetry in the country featuring the nation's best in the art form.

The festival will feature Poet Laureates, Pulitzer Prize winners, and other esteemed award winners from around the globe. Beyond the aforementioned Patricia Smith, the festival will host such US poets as Philip Levine, C.K. Williams, Natasha Trethewey, and Terrance Hayes. The global contingent is bolstered by Raul Zarita from Chile and Eavan Boland, who is considered Ireland's greatest female poet. Newcomers to the festival's stages include Juan Felipe Herrera, Nikky Finney, Fanney Howe, and Gregory Orr.

Although neither a newcomer to Newark's stages nor to the art form of poetry, Mayor Booker surprised the packed audience with two deeply personal and original poems, written in the last week. Mayor Booker remarked at how poetry often serves as a cathartic release for him spiritually, as he writes at least once a week.

Joining the mayor to expound on the great success of the last festival, which was also held in Newark, was Chris Daggett, who has led the Dodge Foundation since 2010. He mentioned how the continued growth and success of the festival is a "small part of the renaissance of such a great city."

The festival's director, Martin Farawell, who is himself an acclaimed poet and directs the Dodge Poetry Program, was on hand to discuss the festival's line-up, in a rapid tone, clearly due to the its breadth. Prior to reading his own selection, Mr. Farawell remarked that "unless you can say that saving the lives of high-school students doesn't matter, you can't say that poetry doesn't matter." The director went on to introduce Patricia Smith, who read a selection from Blood Dazzler, which will premier at the festival and will be accompanied by musicians from the New Jersey Symphony Orchestra.

The excitement is a sign of good things to come. If the line-up is any indication, the stars of the art world are continuously choosing Newark. To quote a verse from Mayor Booker, "you be you, and you'll always win." Newark is clearly winning.

Tickets are on sale now. It is 50% off for Newark residents.
More info: www.dodgepoetry.org/at-the-festival/