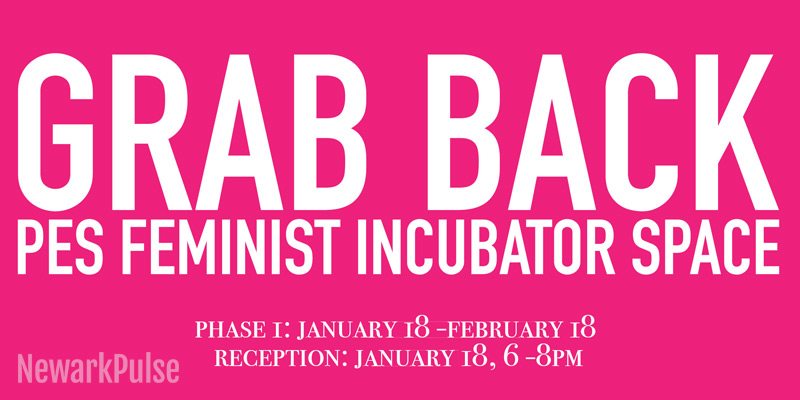 Project For Empty Space is excited to announce the opening of Phase One of GRAB BACK: PES Feminist Incubator Space + Lounge on Wednesday, January 18th, from 6-8 PM at the Project For Empty Space gallery in Newark, NJ. Phase One will feature two concurrent topical artist projects by Angela Fraleigh and Michele Pred, which will be on view through February 18th.

Angela Fraleigh’s project one by one they have vanished in the blank behind their names addresses the historical erasure or dismissal of the female voice. Some of the selected large scale paintings highlight female figures who have long been thought of as passive or ancillary. In revisioning these characters as the foremost subject, Fraleigh gives them a voice and reconfigures the idea of narrative and female agency. Fraleigh’s other works, which feature fighting animals, are a more obvious homage to the larger idea of GRAB BACK; swathed in heavy saturated colors and rich with aggressive tension, these pieces were selected to inspire and rally people to fight against patriarchy.

Michele Pred’s project The Wage Gap highlights the continued inequities in the valuation of women in America. Pred shares with the audience the wide spectrum of wage inequality across racial groups, an element that furthers the discourse around intersectional feminism and the rampant gender-based racism that still exists today. Through a series of literature, discussions, and an installation of Pred’s trademark statement Pred-a-Porter purses, this project is both an exposé and a call to action.

In addition to these projects, January 18th will mark the opening of the Feminist Reading Lounge and an ongoing interactive project called the Pussy Polaroid Project. The Feminist Reading Lounge is a communal space within the gallery where the public is invited read and discuss feminist material. It will also be home to public workshops and programs throughout the duration of the GRAB BACK program.The Pussy Polaroid Project invites women to actively GRAB BACK against the patriarchy by sharing their image and voice in a collective effort. Polaroids of participating women will be added to an ever-growing wall of portraits in the gallery space and shared on Instagram under the moniker @pesgrabback.

What is Grab Back?

GRAB BACK: Feminist Incubator Space is an impromptu series of short-term residencies, happenings, conversations, performances, and public discourses focusing on the empowerment and freedom of women. Prompted by mainstream attention to what has become an normalized climate of hyper-misogyny, rape-culture, and dehumanization of women, GRAB BACK is a means of cultivating productive and critical intersectional dialogue and response to a violence against humanity.

Project For Empty Space’s Newark gallery and a selected suite of studios will function as space for female-identifying cultural practitioners to workshop, present, collaborate, discourse, and dialogue. The incubator spaces function is to create an environment for self-care, conversation, and action against (aka the ‘grab back) the lurking tyranny of patriarchal imposition.

GRAB BACK is a multifaceted endeavor that features a short-term artist in residence program (open call information below), and a rotating gallery program. The gallery will present a series of rotating artist projects/programs over the course of three months, as well as a variety of performance happenings, interventions, and open forum ‘townhalls’ for the public.