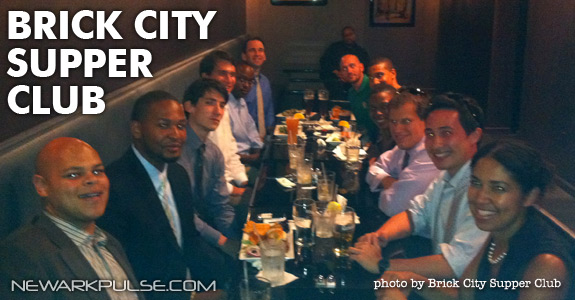 I am going to go out on a dangerous limb and say that in every culture that has EVER existed, "breaking bread," "breaking the fast," "grabbing a bite," or just sitting down for dinner after yelling, "Come and get it!" is the most sacred of traditions in human history. So much so that before you decide whom you love, before you watch a game, before you broker a deal, and practically before you do anything we cherish as people, you EAT.

Beyond boundaries that are political, economic, religious, and even racial, people gather at tailgates, barbecues, weddings, Thanksgiving dinners, Eid, Shabbat, brunches and even the water cooler to share. We share food in hopes of making our discussions of those topics, good and bad, more palatable. Sometimes you check your baggage at the door. Other times you don't. The best times you break down and let you be you, all in the name of food and drink.

In our city, a group of good folks have crafted the Brick City Supper Club. Frank Martinez, who embarked with the simple goal of getting together with friends for dinner once a week, birthed the Supper Club. The weekly dinner gathering quickly became a reason for anyone on an email list to get together. Friends. Strangers. Coworkers. Out-of-towners. All for food and company: "To get to know the city and each other."

Since its inception in 2010, the average number of attendees is 8-12 members per outing, which far exceeds Frank's expectations. With genuine joy, he states, "There are people I've met, that I would have never met." There has been a wide variety of folks, with different age groups and backgrounds to provide varying topics for discussion.

Amongst the varied participants, the team has even attracted a few of our local politicians and caught the eye of a CEO of local company. Frank and Rob Thomas, another founding member, want to reach out to anyone that wants to come. Beyond new faces, they hope that the new members will bring with them more positive energy and love for the city. Beyond new discussion topics, they hope to entice students to cross Washington Street, to foster a positive and diverse experience throughout the city. Although they don't recruit, Rob started the Supper Club's twitter handle for real time updates, along with the weekly email and the dedicated web site.

Beyond their simple premise, the Supper Club has simple codes of conduct meant to ensure everyone enjoys their time together. Diners pay what they owe, allowing people to order as they want. As their website states, "The Supper Club almost always visits reasonably priced restaurants. Everybody has their own budget, so we divide the bill based on what each person orders."

Regardless of the dish, positivity will always be on the menu and served with every order. Cheers! Salut! L'Chaim!