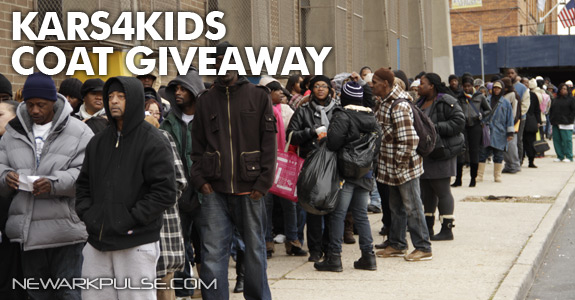 Kars4Kids car donation program and Mayor Cory Booker's coat giveaway for the needy in Newark drew a huge crowd today at the JFK recreation center. Thousands are estimated to have participated, with lines stretching down the block and around the corner, with more than enough coats to go around.

"The crowd was great today", a Kars4Kids spokesman said, "no pushing or shoving, it was very orderly, and there was a real sense of holiday cheer in the air."

Kars4Kids partnered with Mayor Cory Booker for the giveaway, and the Mayor was there giving out coats and spreading around his trademark smile.

Kars4Kids originally planned to host the event at the venue where last year's event was held, but a scheduling conflict left Kars4Kids without a location to host the event. That's when Kars4Kids reached out to Mayor Booker on Twitter. He immediately put Kars4Kids in touch with his chief of staff who helped arrange for the giveaway to be held at the JFK recreation center. "It's a story of the success of Twitter," said the Mayor, who also spoke about how excited he was to partner with Kars4Kids in these difficult financial times, and expressed his appreciation for the work Kars4Kids is doing for people in these difficult times.

Kars4Kids and Mayor Booker's office are already thinking ahead for coat giveaway 2012, when Kars4Kids hope there are less people who need, and more who have the ability to give.


Get the flash player here: http://www.adobe.com/flashplayer