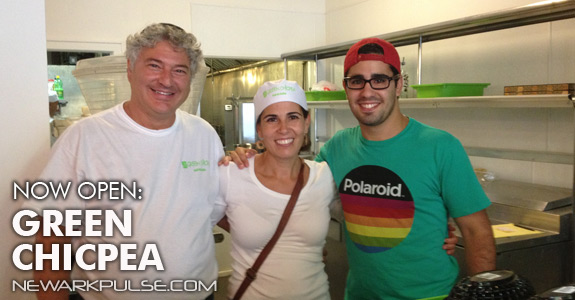 The cradle of civilization is once again bearing its fruit. Located at 59 Halsey Street, The Green ChicPea is open to the public, with a mix of Middle Eastern and North African cuisine.

A family team, Ronit and Martin Weber, are no strangers to the restaurant business. Marty (as he is known) grew up in the biz, the son an entrepreneurial mother, who successfully started restaurants in the Los Angeles, CA area when he was a child and teenager. Ronit, on the other hand, brings a cultural element that has been passed down through the generation.

With Ronit's recipe book and Marty's business acumen, the duo opened their first successful "falafel spot," House of Pita, in 1997, on 48th Street in Manhattan. It was, in Ronit's words, a "home run" unexpectedly from the start. They knew they were on to something, when tourists, yearning for the flavors of home, began to flock to their place for a quick taste and a long conversation.

After lease expirations, two more locations followed, on 46th and 38th Streets. But with three growing children, the couple began to feel over-extended and decided to focus on their family. So in 2009, they sold the business and began to diversify. Ever the businessman, Marty, with Ronit's blessings, took a chance and purchased property on Market Street (now home to Fajr's Seafood). His intent was to, after the children matured a bit, get back into the food arena with their proven concept.

Fast forward several years and tons of time to rejuvenate their senses, Marty decided to take another chance, again with Ronit's blessing and, not to mention, her protected family's recipe book. On Halsey Street, you can see the couple walking back and forth, enjoying the neighborhood, with its young crowd and tons of energy and excitement. Also worth noting, the crowd has a built-in knowledge base and appreciation for their cuisine.

Marty, in our conversation, always harkened back to "adding value," just as Ronit's eyes widened with the thought of young and hip crowds that make up the neighborhood. To serve their customers, The Green Chicpea will make everything on premise and fresh, daily. They kept talking about the "right ingredients" that will deliver on taste and health consciousness, consistently. They want to "create a destination" within the community, eventually featuring music and fresh made lemonade for those warm nights.

The team has also made sure that their restaurant has its Kosher approval. While falafel will be their signature item, the team promises that their customer service and menu variety will be more than enough to satisfy every customer. They promised that customers, after tasting the food, will ask for more. They intend to deliver on that promise, saying, "You're only as good as your last meal."

The Green Chicpea will have a "soft" opening Thursday and Friday, offering samples, as they prepare for the full menu in the coming weeks.