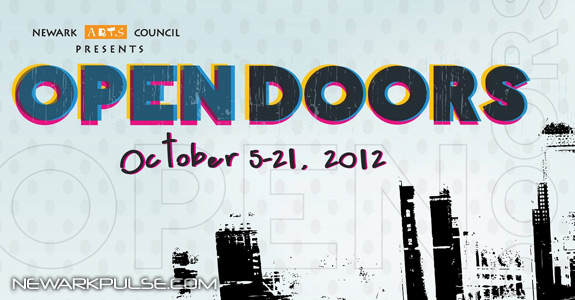 The Newark Arts Council Open Doors Studio Tour will take place on October 5-21, 2012. This year, Open Doors will extend over three weekends throughout the month as opposed to its characteristic 4 days. Participating each year are over 300 accomplished local, national, and international artists and all of the City's leading art galleries and cultural institutions. Open Doors is one of three major festivals happening during the month of October which has been deemed Newark Arts Month (along with Dodge Poetry Festival and the inaugural James Moody Jazz Festival).

The Newark Arts Council has planned for several new and exciting events during this year's tour. We will be host to a specially curated exhibit from the renowned New York based International Studio and Curatorial Program (ISCP) as well as other regional artist collectives.

The Quarter Mile Print (Sunday, October 7) is a project co-planned by artist Stephen McKenzie and the Newark Arts Council and is one of the most anticipated new programs during Open Doors. This free and accessible project will involve hundreds of people including but not limited to: local artists, professionals from the gallery community, and all participants from far and wide. Attempting to break a Guinness World Record, the Quarter Mile Print will be created around Washington Park and printed by steamroller. When completed, the prints will be shown for a brief time at the Rupert Ravens Contemporary Gallery on Market Street in Downtown Newark. As individuals leave, they will be able to take home their piece of this original artwork.

Newark Arts Council plans to highlight four of the city's galleries that double as art houses. Gallery Aferro, Solo(s) Project House, Index Art Center, and 31 Central are home to some of Newark's veteran and emerging artists. Studio Spotlights will be featured throughout Open Doors, giving individuals a behind-the-scenes look into artists' studios and the "˜collective' experience. There are several other programs being planned that will emphasize distinctive Newark neighborhoods like the Ironbound Section and the Lincoln Park District which is home to prominent gallery City Without Walls. Our focus is to foster a sense of community pride while engaging individuals throughout the entire city.

Open Doors will be ushered out with a bang by the Creation Nation Art and Peace Parade scheduled for Sunday, October 21. The parade"”which has become a highly anticipated annual event tied to the festival"”features artists, residents, community organizations, marching bands and arts lovers from around the state as well as the loved Animodules. Creation Nation, a division of the Barat Youth Initiative, will also be hosting an exhibit of the Animodules in their creative space during the opening weekend of Open Doors. (See photos from 2011)