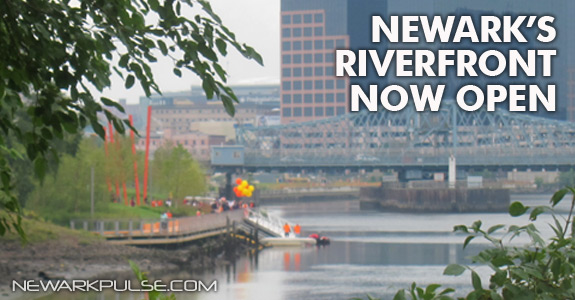 This past Saturday, August 3rd, despite cloud and rain, residents walked to the Riverfront to welcome a new park and it's orange boardwalk. As the morning progressed, the sun came out and showcased this beautiful addition to the city. Activities for the day included: mural dedication, performances by students, yoga by Newark Yoga Movement, kite flying, kayaking, arts and crafts, games and more. See pictures below and a fun FAQ's about Riverfront Park:

Why is the boardwalk orange?
Many reasons. Here's a few:
1. Since the boardwalk is made of recycled plastic (like gallon milk jugs), it didn't need to be wood-colored.
2. It's the color of Weequahic High School.
3. Like a giant safety edge for the city.
4. Like the orange things you see on a construction site, Newark's riverfront remains a work in progress, with another phase in the works.
6. Mayor Booker is often photographed wearing his orange tie.
7. Orange is used in color therapy to induce hunger, and there are many delicious things to eat in Newark, from Brazilian hamburgers to Portuguese dry soups to Southern yams & greens to Caribbean roti to old-school Italian ice cream.
8. In Hindu tradition, orange is the color associated with the second chakra, linked with the element of water.
9. Princeton University was founded in Newark, and orange its color.

What are the orange sticks?
Newark Riverfront Park sits on a sloped site between Raymond Boulevard and the Passaic River, and the sticks, also known as the Dancing Pavilion, are tall enough to be visible from the road and Riverbank Park.

How polluted is the Passaic River and who is responsible for cleaning the river?
The lower 17 miles of the Passaic River, including the entire 10 miles that border Newark, have been declared a federal superfund site by the US Environmental Protection Agency. While short-term contact with the water is not usually hazardous, swimming is not allowed and it is very hazardous to human health to eat fish or crabs from the river.

Although there are over 70 companies included in the "cooperating parties group" potentially liable for the clean-up of the contamination in the River, the Occidental Chemical Corporation, successor to original owner Diamond Shamrock Chemicals Company (major manufacturer of pesticides and herbicides including the defoliant "Agent Orange" at the 80 Lister Avenue site in Newark), is believed to be the primary source of dioxin, the most significant contaminant in the river. An entity named Tierra Solutions was created by Occidental as an asset-less company to hold liability for the dioxin pollution, but a recent court decision as part of the NJ State litigation allows recovery from Occidental. The EPA and NJDEP are primarily responsible for overseeing the clean-up. More information can be found at www.ourpassaic.org

How do I get there?
Newark's riverfront parks are located on Raymond Boulevard between Van Buren and Brill Streets in the Ironbound neighborhood, a short walk from Newark Penn Station. They are also served by the New Jersey Transit #1 bus.